I have a cousin who works as within Givenchy and one of her best friends from work was at the fittings for Meghan’s wedding dress and the flower girls. My cousin had just went on maternity leave but basically what Meghan is saying is nothing but lies and nonsense as she was a complete diva and treated the seamstresses & Givenchy staff horribly so and was nasty to Clare who was there most of the time alongside my cousin’s colleagues and best friend.

Meghan made Catherine cry, knowing she was pregnant and this was because she was incredibly nasty to Charlotte. Meghan was adamant on not having Charlotte or George in the wedding party but Charles & the Queen made her do so as they are Harry’s niece & nephew, and basically they’re paying for all this so you will do this. 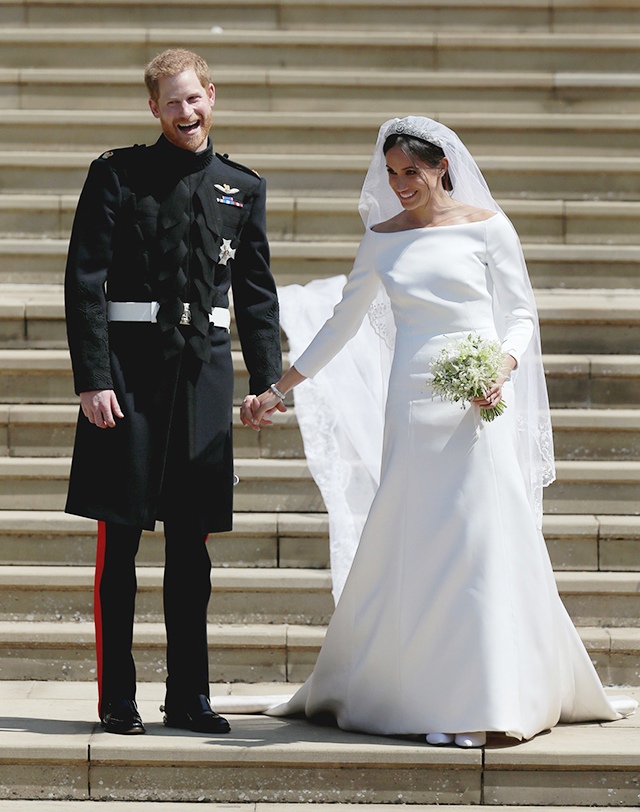 All the staff were at their wits end because of Meghan. She would have them working on strict rules and long hours but then would shout at them saying that their work was awful, that she didn’t want it like that and forcing them to start all over again. She slapped one of the staff who was trying to do the fitting for one of the first design ideas that Meghan wanted, when they did nothing wrong. All the staff have said that Meghan definitely seemed to enjoy treating them like servants and constantly belittling them whilst on their backs about it all. Most were nervous wrecks, and I’m glad my cousin was off away from it all.

See also  What is the threat to the lioness and Prince Harry's cub?

The Givenchy staff gave her nicknames such as were The Dictator Duchess-To-Be, Meddlesome Meghan and Ms. Snobby. My cousin’s colleagues say they’re certain that how Clare allowed Meghan to constantly treat them, the Givenchy staff but also the end result not reflecting the high standards of Givenchy either, is a major factor in why Clare was let go so suddenly. But Clare is apparently quite like Meghan in that they are arrogant & pushy.

But concerning Charlotte. Meghan HATED having to include her as a bridesmaid and made it quite frighteningly clear & constantly mocked and made fun of her especially when she would arrive from home or school like any young child, a bit messy from having fun, called her chubby and mocked her voice. Charlotte said to Meghan about how she’d be her new Auntie like how she had her Auntie Pippa which Meghan went off about saying she was much better than Pippa Middleton, who it had been announced privately, was pregnant. 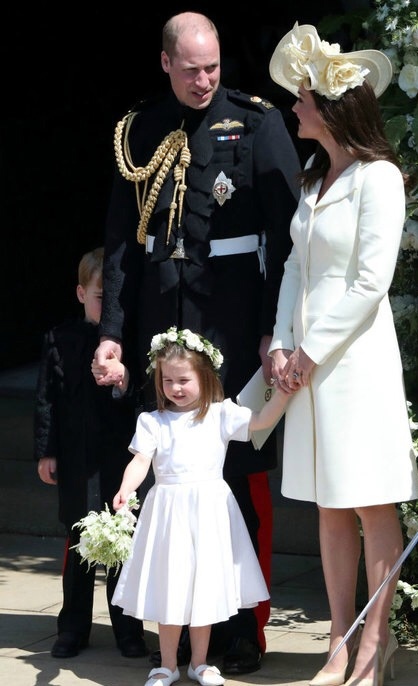 Catherine found out from María who witnessed it, and both ladies including William were furious as Charlotte had been reduced to tears but Meghan would then mock her for crying. Ivy Mulroney isn’t a nice little girl whatsoever, and was constantly rude to the women working on her dress fittings when she arrived and Meghan definitely showed a lot of favouritism towards Ivy over Charlotte and pitted them against one another, saying that Ivy was going to be the best flower girl and that Charlotte should learn how a proper girl behaves, basically encouraged Ivy to bully Charlotte which she did. Charlotte ended up getting pulled out of the fittings due to how Meghan and also Jess & Ivy were mocking and bullying her which is the reason why Charlotte’s dress didn’t fit to her proper measurements as the seamstresses had to use Florence van Cutsem for the fitting of Charlotte’s dress. Meghan had been rude to Catherine, Charlotte and María for pretty much the whole thing, and a strong rumour is that is one of the reasons the FabFour summit was so tense. 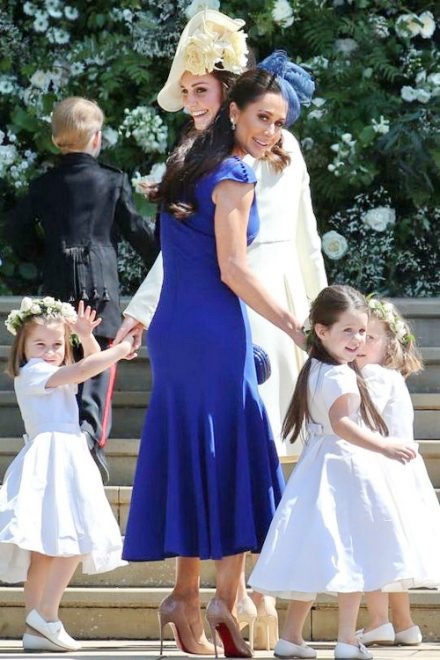 The shoes were a big issue for the British born flower girls and their parents as they were really uncomfortable for them but Meghan refused to let them wear tights or even socks, and said to the Givenchy and Aquazurra staff that this was what happens when you coddle children, they turn into horrible whiny brats that want everything when it is HER wedding. The flower crown head-wreaths were also last minute and literally had Charlotte told at before she got in the car that here was hers which is when it was quickly fitted best as possible. Ivy was singled out again by Meghan as the special one, and called the mini maid of honour which is why she didn’t have a flower crown head-wreath or her own bouquet as Meghan had made it clear to all the other girls even Remi and Rylan, children of her college friend that they weren’t as good as Ivy. 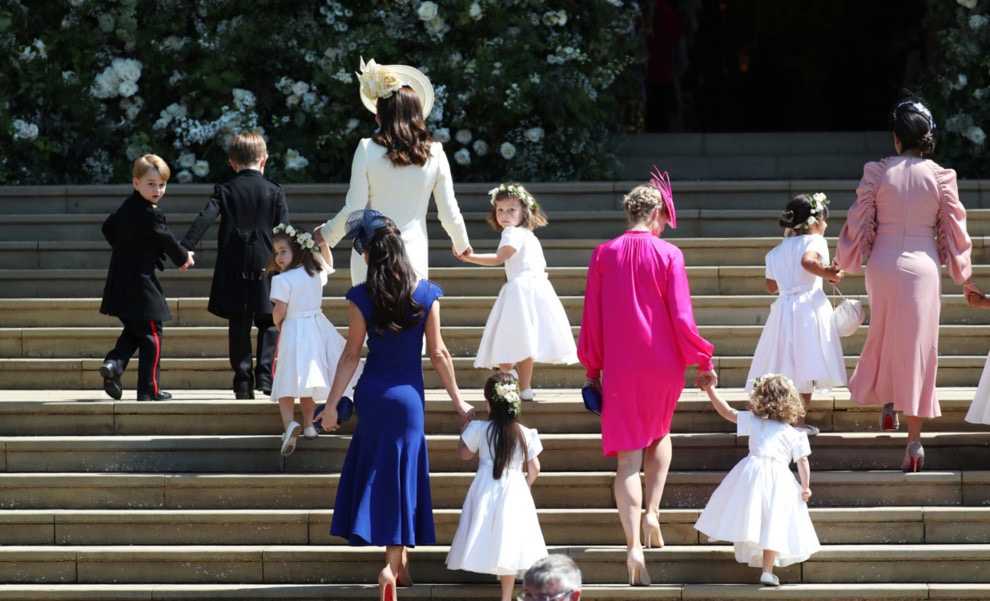 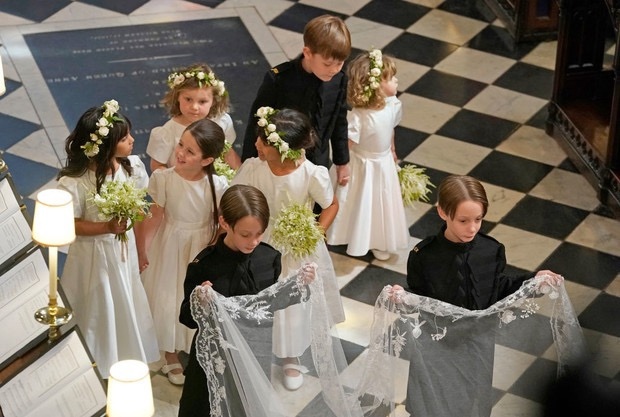 The florist was so last minute getting chased up that it is a reason for why the flower colour scheme didn’t fit with the wedding & flower-girl dress colours. Clare tried to get Meghan to try a more muted white fitting for a divorcee and an understated veil but Meghan just screamed at her about unnecessary negative opinions and my cousin’s best friend that was there at the time.

OMG!!! This is horrible. Although the fitting story is obviously embellished, I still believe it. People like Megan are very fond of being rude to the service staff in public. That’s just it gives out that there is no class in it and never will be.