Meghan and Harry, the ex-royals who moved to Beverly Hills, California, are in debt and are getting desperate. Although President Donald Trump made it crystal clear that American taxpayers would not be footing the couples bill for security, it appears Meghan and Harry are making wild accusations hoping the president will have to re-visit his decision. Well, the cops in Los Angeles have had enough of the dastardly duo. You’ll love this.

Just when you think Meghan and Harry couldn’t get any more despicable, they pull a stunt hoping to get sympathy from Americans that will turn into an answer for their yearly multi-million dollar security bill. In case you missed it, Meghan and Harry have hit a new low point. Even “The Oprah” turned her back on the couple.

It all started when the ex-royals hit Los Angeles with hat in hand looking for a gullible celebrity to offer a nice mansion (preferably in Malibu or Beverly Hills) that they could live in rent-free while they “looked for a suitable residence.”

Enter actor and producer Tyler Perry, who is one of the sweetest guys in Hollywood. Somehow, Perry heard via Oprah, or reports said, that the dastardly duo needed a place to crash and he offered them his $18 million dollar Beverly Hills estate. 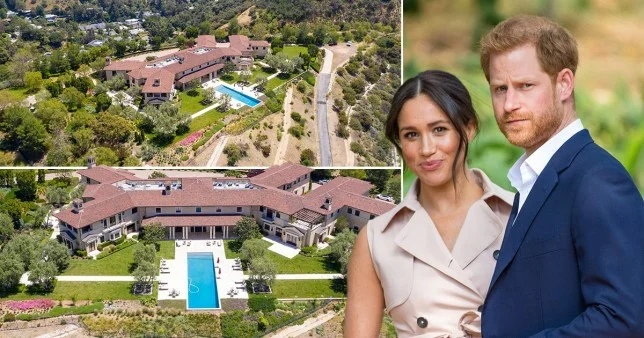 “Why pay rent if they can use faux friends to hand over the keys to their spare houses for free? That’s what they seem to be doing, and as their new initiative is being delayed, there seems to be little cash to throw around as before,” an anonymous source said.

Immediately, Meghan’s PR people made sure the paparazzi knew the couple and their one-year-old son Archie were living in the lap of luxury at Perry’s estate. Meghan desperately needed to get back in the news and hoped the publicity would lead to lucrative money-making deals for the couple.

“Each time a story is leaked via a source close to the couple, you have to snigger because we know it’s probably Sunshine Sachs, or [Meghan Markle] using her Hotmail account pretending to be her own [personal assistant],” said an anonymous source.

With Perry’s estate in a gated community and with L.A. still in lockdown, it’s highly unlikely a large number of paparazzi could gain entrance to the secluded location which backs up to a wooded area unless the former royals invited them in.

As the coronavirus lockdown went on, Meghan and Harry even “staged” photo ops in their front yard with their dogs. Old friends like tennis champion Serena Williams heard about the couple’s grifting lifestyle and she mocked Meghan publically stating: “Don’t know her. Never heard of her.”

Well, that’s when Meghan wrangled Tyler Perry to put in “security fencing.” Something no other celebrity in the exclusive neighborhood has needed, like Sly Stallone, Rod Stewart, or Mark Walhberg, reports Fox News. 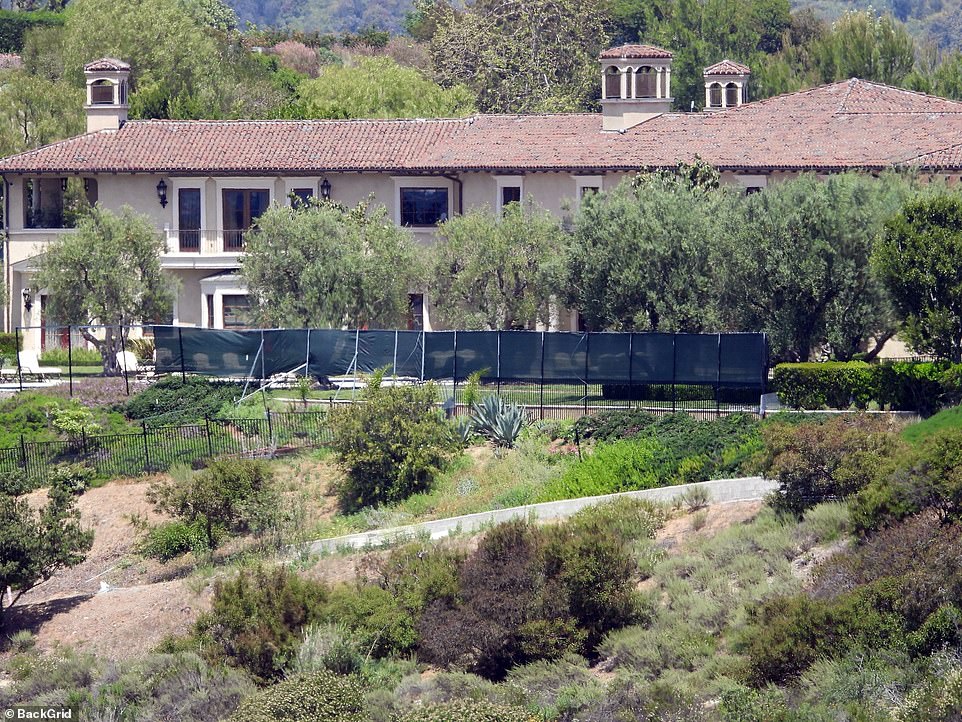 “This isn’t the first time Meghan and Harry have made home improvements to gain more privacy,” Fox News adds. In February, the couple pulled the same stunt on the Clinton family close friend Frank Giustra, who owned the 14 million dollar estate on Vancouver Island the roving royals stayed in. That property also was fitted with elaborate new security even though it really was not needed. 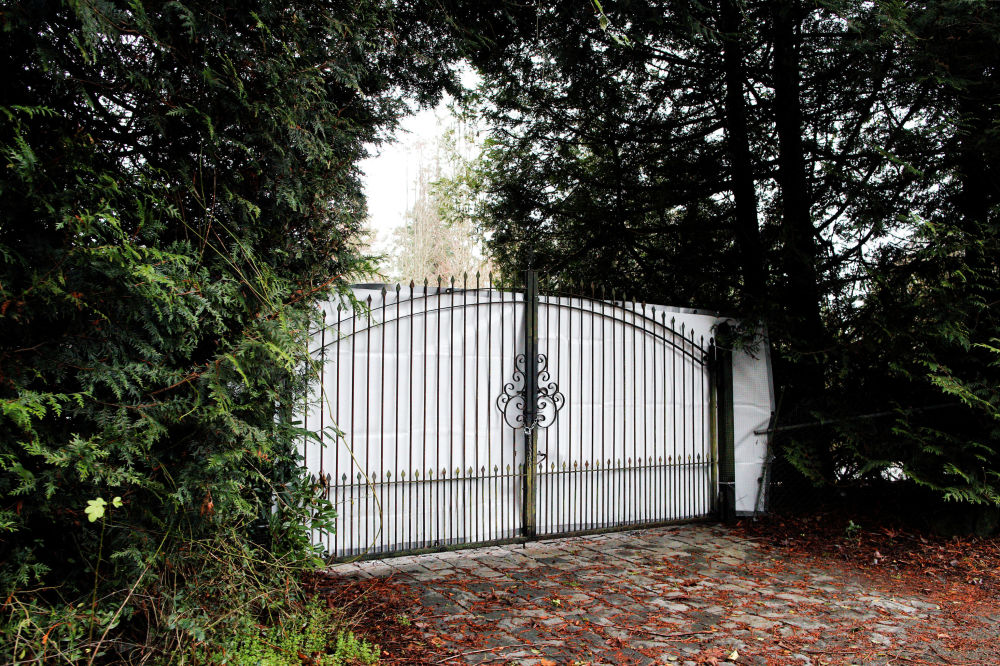 This is when Oprah Winfrey had enough of the dastardly duo.

Oprah is close to Tyler Perry, and after she got wind her good friend was being scammed by the ex-royal grifters with free rent and being pressured to erect security fencing, the 66-year-old talk show queen unleashed her best friend to set the record straight.

There is a method to Meghan’s madness with added security and faux paparazzi reportedly roaming around in one of the most exclusive Beverly Hills neighborhoods. Meghan and Harry can’t afford to live in the style they are accustomed to, and one of the biggest expenses they tried like hell to get rid of was their security bill.

“There have been at least five drone-related incidents at the mansion so far this month, all of which they’ve reported to the authorities, in which paparazzi photographers have reportedly flown drones as low as 20 feet above the property in order to snap photos of Prince Harry, Meghan and their one-year-old son, Archie,” The Observer reports, one of Meghan’s “go-to” media outlets.

“Prince Harry and Meghan are reportedly especially concerned because of the ‘repeated racist abuse and trolling‘ the Duchess of Sussex has received, and see the drones as ‘potential terrorist threats.’ A Sussex pal told the Daily Beast that the couple feels ‘violated’ by media efforts to discover their whereabouts,” The Observer adds.

“Harry and Meghan have reported multiple drone incidents at their home to the cops,“ The Daily Beast reports.

Meghan’s PR people wanted to make sure the public was aware that reports “Prince Charles is paying for Harry and Meghan’s security are untrue.”

The couple has now told friends that when they do hire their own security team, they will pay for any such service out of their own money. “They are not asking for any special treatment, and have not received any,” a source “close to Meghan” said.

President Trump made it clear the U.S. taxpayers would not be footing the wandering couple’s security bill in a tweet which has over 500,000 likes:

I am a great friend and admirer of the Queen & the United Kingdom. It was reported that Harry and Meghan, who left the Kingdom, would reside permanently in Canada. Now they have left Canada for the U.S. however, the U.S. will not pay for their security protection. They must pay!

According to anonymous sources at the Los Angeles Police Department and the Los Angeles Sheriff’s Department, the frequent “non-emergency” calls coming from the ex-royals smells like an attempt to get their security costs covered by the local police authorities.

See also  Friends of Meghan and Harry claim that he is happy in Canada. Does Harry know about this?

“It’s not going to work,” said one police source. “This is Los Angeles. Where being a celebrity is a dime a dozen. Law enforcement officers in L.A. are fighting real crime, and we aren’t the neighborhood watch. Maybe [Harry and Meghan] should go on a ride-along in South Central. It would give them a taste of how cops in Los Angeles are busy risking their lives every day.”

It’s just a 20 to 30-minute drive from Beverly Hills to South Central Los Angeles, which is notorious as one of the biggest areas for crime in the nation.  There were 243 people murdered in Los Angeles over the last 12 months. You can hear gunfire every night in South Central, which makes these wild accusations of “terrorist threats” by the ex-royals seem so ridiculous.

Is it any wonder why Brits and Americans alike can’t stand the on-going drama of Harry and Meghan? It’s quite clear they can’t afford to live like kings in Hollywood. Maybe that royal gig they gave up — of the titles, the money, and the lush lifestyle in Britain, wasn’t such a bad deal after all.

Meghan Markle & Prince Harry Are Nothing More Than Professional Freeloaders!