Joanna Williams Is writing: “The antics of the Duke and Duchess of Sussex have never seemed more utterly irrelevant”

Hats off to the Duke and Duchess of Sussex. It’s hard to get the world’s attention in the middle of a global pandemic but the couple’s perseverance has finally paid off.

When news of their plan to launch a charity, Archewell, was met by a collective sigh of ‘please, not now,’ they did not give up. Instead they spent time delivering food parcels to the Californian poor, Zooming the families of seriously ill children and recording a podcast praising volunteers for helping those in need. Hopefully, the charities Harry and Meghan have been working with, Project Angel Food and WellChild, have received some additional donations. And, as an added bonus, snaps of the couple wearing masks and carrying packages of food have been widely circulated. But still, none of this do-gooding really made the headlines. For that, they have had to fire off the latest salvo in their long running feud against the press.

In an open letter to the editors of selected newspapers released on Sunday evening, the couple set out their ‘new media relations policy’. Harry and Meghan may have given up on their commitment to the institution of the monarchy, rejected subsidies from the British public and left the UK for Los Angeles, but their campaign against the British tabloids continues apace. The public statement from the couple moves swiftly from obligatory nods to the importance of a free press as a ‘cornerstone to any democracy’ to moral grandstanding about the dangers of power being ‘enjoyed without responsibility’. The emotional denouement comes with news that the pair, will not ‘offer themselves up as currency for an economy of clickbait and distortion.’

With concern about global death tolls from coronavirus, the state of the National Health Service, and the efficacy of lockdown, the antics of the Duke and Duchess of Sussex have never seemed more utterly irrelevant. Yet their statement lands precisely now, when public interest lies elsewhere. It seems the royal couple want to be in the public eye so badly they are acting like the jilted lover who phones to announce he will no longer be speaking to you. Through berating the press, Harry and Meghan garner acres of press coverage.

‘The Duke and Duchess of Sussex will not be engaging with your outlet,’ their statement to tabloid editors insists, ‘there will be no corroboration and zero engagement.’ Despite the strong words, this changes little. It’s not as if the royal couple have been enthusiastically engaging with the tabloids up until now. Harry’s contempt for the press is longstanding and well known. And it’s hardly news that in stepping back from the royal family the couple will no longer be part of the ‘royal rota’ granting privileged access to selected journalists.

So why has this statement been issued now? We are led to believe this is not self-interest but compassion: ‘The Duke and Duchess of Sussex have watched people they know — as well as complete strangers — have their lives completely pulled apart for no good reason, other than the fact that salacious gossip boosts advertising revenue.’ Certainly if you mix with Hollywood A-listers you are more likely to know people who feature in gossip columns, but the line between fair comment and ‘salacious gossip’ is, at best, subjective. Often it seems to be drawn at the point where journalists divert from simply transcribing publicists’s carefully honed press releases.

In their defense, Harry and Meghan are quick to point out that their new policy is not about avoiding criticism: ‘Media have every right to report on, and indeed have an opinion on The Duke and Duchess of Sussex, good or bad. But it can’t be based on a lie.’ They are right of course: journalists should not fabricate stories. Only there is little evidence they have. If the pair are aware of lies that have been written about them then they should reveal what these falsehoods are.

After all, the couple are clearly not shy of bringing about legal proceedings. Their latest statement comes amid the ongoing dispute over who owns the copyright to a letter Meghan sent to her father and whether or not the Mail on Sunday was right to publish it. Widespread coverage for Meghan’s side of the story in advance of the trial can certainly do her case little harm.

The Duke and Duchess of Sussex are walking a fine line in their war on the tabloids. Being in the public eye while also retaining tight control over what gets published about you is a hard act to pull off. Harry and Meghan risk being viewed as hostile to tabloid readers as well as tabloid newspapers: after all, it’s the public, or certain sections of the public, who purchase newspapers and click on websites. These people, it seems, are just not a good fit for brand Archewell.

This article was originally published on The Spectator’s UK website.

The oddities of Meghan Markle’s genealogy

The oddities of Meghan Markle’s genealogy

The Death of Catherine the Great 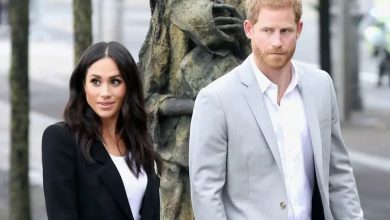 The Queen lost to Sussex? I don’t think so…