While Prince Harry’s grandmother is one of the wealthiest and most famous women in the world, Meghan Markle’s grandmother grew up in a completely different environment and different circumstances. But she was no less formidable.

Jeanette Ragland, who grew up poor in Cleveland, Ohio, was the daughter of a bellboy and an Elevator operator at a “trendy white-only hotel.”

“She was a man, a woman, and a mother in the family. She was a real hardy tin soldier” ” recalled her son, Joseph Johnson.

Jeanette, who was born at the beginning of the great depression in 1929, married Joseph’s father when she was about 20 years old. Joseph Jr. was born in 1949, and his sister Sandra three years later. Soon my father left to start another family.

“We moved 20 times in a few years. We were never hungry, but we were poor” ” recalls Meghan’s uncle.

When Joseph was six years old, his Catholic mother met the charismatic antique dealer Alvin Ragland, a former Baptist Minister. The couple immediately fell in love and moved into a basement apartment in a three-story building in Cleveland.

Meghan’s mother Doria Ragland was born in September 1956, and a few months later Alvin took the young family and drove across the country to Los Angeles.

Doria’s father Alvin divorced Jeanette shortly after they arrived in Los Angeles. Later, he worked as an Antiques dealer, managing the Times New store, and on Sundays in a tent at a flea market. Alvin would later die from a head injury after tripping over his dog’s leash.

Although Joseph and Sandra are technically Doria’s half-siblings, They were very close and equally loved.

“We were raised together. Doria was the youngest, but like Meghan, she is smart, and always wanted more out of life,” says Joseph.

She was very proud of her hair – “big beautiful Afro”.

“The fact that he was white didn’t matter. We would accept pink, black, brown, or red if Doria loved it. All that mattered to us was that he treated her well. The wedding looked ridiculous. At 6 feet 3 inches, bearded and balding Tom, then 35 years old, dressed in a gray jacket and red shirt, towered over the 5-foot-2-inch bride.” 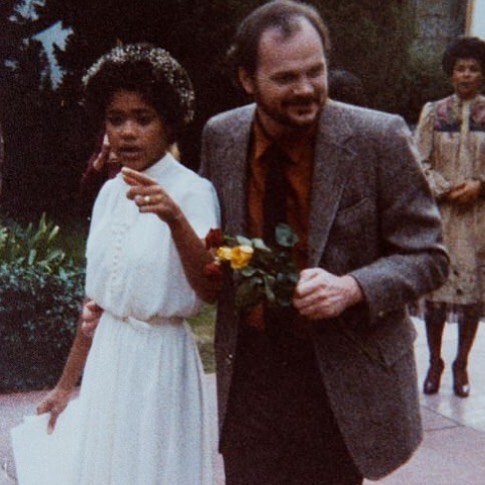 Jeanette helped raise Meghan when Doria returned to work after her birth, first as a yoga teacher and then as a social worker.

“Megan was raised by Doria and my mother,” says Joseph. “We spent weekends and holidays together. It was always magical. I saw Doria raise Meghan, and it helped me with my own boys.

Our mother was strict, and she could easily spank us. Doria never spanked Megan.”

He remembers Meghan as a friendly, inquisitive child who loved cats and “radiated happiness”. “Her mother called her Flower, and That was her last name.”

When Jeanette had a stroke, Meghan helped care for Her. Joseph says: “My mother lived with us. Megan and her mom came over on weekends to give us a break. Meghan talked to her, held her hand, did everything she could for her grandmother. She loved her very much. When I look at Meghan, I see my mother and sister very clearly, ” he adds.

The last time Joseph spoke to Doria was when She called to break the news of Meghan’s affair with Harry. Meghan’s aunt and uncle probably didn’t get an invitation to the wedding. Interesting to know, and what they did to fall out of favor with the Duchess?