The monarchy is now facing its worst crisis in decades, but on Tuesday evening the Queen responded saying “the whole family is saddened” to hear the claims.

A statement issued by Buckingham Palace on behalf of Her Majesty The Queen tonight said: “The whole family is saddened to learn the full extent of how challenging the last few years have been for Harry and Meghan.

“The issues raised, particularly that of race, are concerning. Whilst some recollections may vary, they are taken very seriously and will be addressed by the family privately.

“Harry, Meghan and Archie will always be much loved family members.” 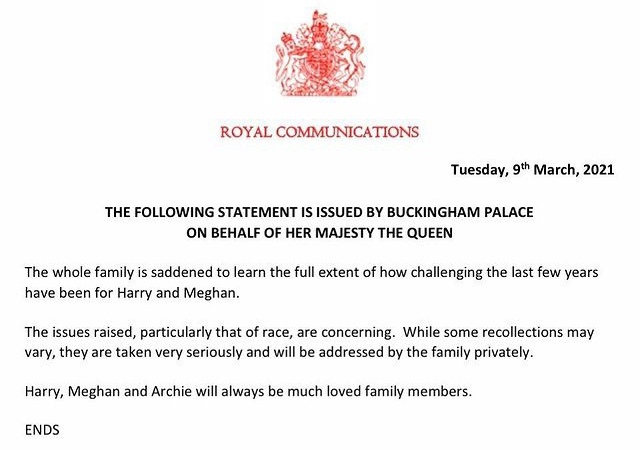 Among the many claims, Meghan, 39, said she had suicidal thoughts as she struggle with life inside the Firm, and a member of the Royal Family questioned how dark her son Archie’s skin would be when she was pregnant with him, The Mirror reports.

The Duchess of Sussex suggested Archie wasn’t given the title of prince because he is of mixed race, and that she was silenced by the royals and unprepared for life inside the Firm.

Harry said he felt let down by his father, Prince Charles, who stopped speaking to him after the Sussexes moved to Canada before Megxit, and also revealed that the rift between him and his brother, Prince William, continues.

The Duke of Sussex claims he and former Suits actress Meghan left the UK with Archie for a new life in California because there was a “lack of support and lack of understanding” from his family.

Harry said he had been “trapped within the system, like the rest of my family are”.

Prince Harry and Meghan Markle Detail What Led to Royal Exit: We Didn’t Blindside The Queen